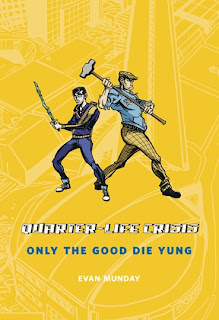 1. Graphic fiction, we are told, is in; it has arrived. Academics talk about it, literary publishers include it -- sometimes -- on their lists. But how accepted is it really? Is it genuinely accepted by the high-brow, and viewed with true objectivity? Or is some of the praise that it is given merely bumpf? After all, MFA programs specialize in writing, not graphic fiction; English departments rarely if ever pay attention to graphic fiction; major publishers do not publish much of it, and major prizes never include it in short lists, even though it can be a form of novel. What needs to change for graphic fiction to gain more acceptance?

I'd say it has arrived, to a real degree. MFA program don't specialize in graphic fiction, true, but I think English departments are paying a lot of attention to graphic fiction. There are graphic novels on several English courses here at U of T. Not most of them, mind you, but I think their prevalence is growing in academia. I think MFA programs and major prized rarely focus on the genre because they don't know what to do with it. It's largely an illustrator-driven genre. Some of the best-known authors in comics (Art Spiegelman, Julie Doucette, Dan Clowes, etc) illustrate their work. And if they go to school for graphic fiction, it's to hone their illustration craft, rather than their writing. But I'm not sure that means graphic fiction hasn't arrived.
I feel that comics are a completely different medium. They come in book form, but I feel they land somewhere between books and movies.
One thing that hasn't happened, though, is the acceptance of all comics. Now, there's a very specific subset of comics that are considered 'worthy' (typically memoir or historical narratives), and the mass of what is published (superhero stuff, manga romance, crime tales) is treated largely as entertainment. There's not the same kind of critical attention given to the Stephen Kings or John Fords of the comics industry, the way there is in literature and film. Not sure if that analogy makes sense ... I hope so!
2. According to critic Alex Good, literary fiction is selling poorly these days and graphic novels are doing better. Is this as far as you know true?


I don't know, but I can say that graphic novels are the one real 'growth sector' of printed books. I wouldn't say literary fiction is not selling or selling poorly. (Hard for me to say, as that and poetry is largely what we sell at Coach House, and things seem to be going as well as they ever have here.) But sales of graphic novels are increasing year after year. So it's the one section of publishing that's doing better and better as time goes on.
3. Canada has produced a bounty of strong graphic fiction artists, including Julie Doucette, Chester Brown, Seth, etc. Any newer names you'd like to add to the list?


Yes. You may already know some of these, but I think Jeff Lemire is an oustanding comics guy. He did the Essex County Trilogy (a series of tales set in Ontario), and more recently has done work for Vertigo (The Nobody, Sweet Tooth).
And personally, I'm a fan of some of the more fun, unapologetically entertaining work, so I'm really into Bryan Lee O'Malley's video-game hipster romance Scott Pilgrim, Kate Beaton's historical web comics (Hark! A Vagrant!) and James Turner's justice-driven librarians (Rex Libris).
Also, he just has one book out so far, but I think Ethan Rilly is extremely talented. He just put out a short book called Pope Hats that I really like.
4. Can you tell us a little about marketing and distribution in the self-publishing world?

I haven't done a great deal. If I weren't working full-time, and if I could devote more of my self to my self-publishing endeavors, I'd have different answers. As it is, I don't have much in the way of time, and also, it's a strange line to tread. I do the same thing in my day job, so I'm hesitant to spend too much time publicizing my own book (when I'm employed by Coach House to publicize their/our books).
I printed the books at Coach House. I got estimates from Coach House Printing, worked out how many books I'd want printed, and what I had to sell those books at to make anything resembling profit.
In terms of distribution, I haven't done too much. I go around to local comic and bookstores and some take them on consignment. Others buy them up front. I've had a lot of luck at stores like The Beguiling, who have reordered several times. It helps that I know a lot of the booksellers (comic and otherwise) in Toronto. I also sell through my website (mail-order) and at a lot of events -- comic conventions, festivals, readings.
I haven't really done much in the way of marketing, mostly because it's a weird area for me, as it crosses over with what I do at Coach House. But I did send out some review copies, mostly to Toronto publication and websites and had a few reviews. Other than that, it's trying to get my face out at fairs and conventions, along with some other Toronto comic illustrators (we've formed a small collective called SketchKrieg!).
작성자: Finn Harvor 시간: 5:13 am No comments:


Alex Good shakes the dust off his feet and moderates a panel discussion of the GG shortlist for poetry, with Jacob McArthur Mooney and Brian Palmu.
작성자: Finn Harvor 시간: 5:18 pm No comments:

Kerry Clare talks to Zoe Whittall, who most recently has written a short novel for Orca Press's Fast Reads.

A Brief History of Time at Work 2


In and Out of the Working Class by Michael D. Yates, Arbeiter Ring Publishing.
작성자: Finn Harvor 시간: 5:15 am No comments:


Zach Wells reads two for Remembrance Day. Incidentally, one of my German co-workers told me that the eleventh hour of the eleventh day of the eleventh month is the beginning of Carnival in Germany. This isn't merely an example of cultural difference, it is, to my mind, an example of cultural difference crying out for semiotic/sociologic/psychoanalytic meta-analysis. On the one hand, a war in which a nation-state whose foreign policy was still beholden to an imperial power managed to prove [add irony quotes] itself on the battlefield, and thus, more or less in time for the next global conflagration, establish itself as truly sovereign, while another nation state, eager to prove its mettle/anxious to build an empire of its own/confused as to how to disentangle itself from a world-historical policy blunder, launched into a war that chewed up an entire generation of its young men (along with same for the war's other belligerents), lost, and ... set the stage for the political fanaticism that would trigger the next major war.


Remembrance Day is celebrated in Canada as a rather solemn event honoured primarily by school-kids led into gymnasiums where they are read "In Flanders Fields". World War One, not World War Two, remains the ceremony's focus (at least, that's how it was for me in grade school). In Germany, apparently, it is the beginning of a beer-centric bacchanalia whose purpose is a forgetful fun. Neither national culture quite wants to face the post-millennial reality: militarism is alive and well, and all the poppies and all the Becks cannot neutralize that fact that treating history as a museum piece or just obliterating it altogether with litres and litres of top-quality brew don't alter that one of war's main roots is cultural acceptance of militarism.


James of Workblogging on being canned by text.

A Brief History of Time at Work 1

Above is one of the less iconic photos from the Great Depression. Of course, while the style -- from the fashions people wore to the method by which employment agencies marketed themselves -- has changed, a lot remains the same. I remember first getting work through an employment agency, located around the corner from my shared house on Callandar Street, when I was spending my first years in Toronto. It was a small storefront that managed to exude a hopeless quality far out of proportion to its size.

One goes to an emploment agency for obvious reasons, but one also goes out of a sense of desperation -- the uneasy feeling that while others have it all figured out and know how to land the really plum jobs, one is missing something, is a bit clued out, is de-looped. The rationalizing thought that occurs is this: at least one is doing something. But this something is being performed in a feckless, inefficient manner.


The agency is the one making the real money. The man or woman who works for it for a few days -- or weeks, or months -- is the vehicle that supplies profit; a profit that goes primarily to the organizers of the agency, not the one who does the daily labour ... not the worker.
작성자: Finn Harvor 시간: 6:20 pm No comments:

My interview with John Reed on TALES OF WOE is now up at Literary Kicks.
작성자: Finn Harvor 시간: 8:28 pm No comments: