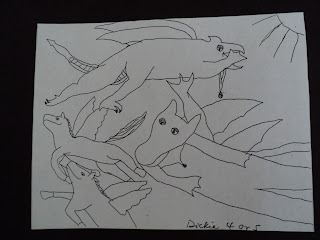 This is one of Richard's childhood drawings (age 4 or 5). Artistically he was very precocious, and developed a sense of form quite early. He was also fascinated by mythical creatures. These are horses and dragons, I suppose, though the mentality of kids being what it is, I might be getting it a little wrong -- that is, the "dragons" might be forms of quasi-magical lizards that he had specifically in mind. (My friend Doug told me a story about his nephew Andrew scolding another kid who was making a toy dinosaur fly through the air at pre-school; Andrew told his classmate: "Dinosaurs can't fly!"). Well, these are flying animals. Hopefully, I've got the terminology right.
작성자: Finn Harvor 시간: 6:39 pm No comments: 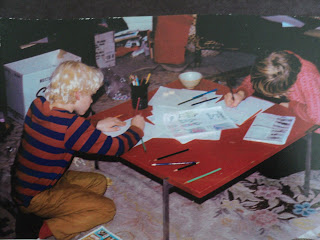 The earlier photo of Richard and me playing with a plastic airplane is so early that I don't have a clear recollection of the incident. I must be around 3 in that photo, but my memories of that house on Hastey Avenue are primordial and impressionistic.

Later, when our family moved to 22 Rideau Terrace, we started drawing habitually (every day during the vacations, and pretty regularly as well during the school year). We used a Danish coffee table that was in the living room. I remember the table itself -- it was sort of arty, but, because it was chipped, I didn't think it was as cool as the furniture in my friends' houses. At one point the table was repainted. This might be the new paint-job here.

We were into comics. That was art for us -- that and a series of one-off sketches ... monsters, tanks, superheroes, and so forth. I was more interested in funny comics and war comics (larfs or history), Richard was more enthralled by action (the re-making of the self; the pumping up of the body into a new and invincible self).
작성자: Finn Harvor 시간: 10:42 pm No comments:

My anarcho-hop poem nHi-lizm is now up at The Puritan. Check out the whole issue.

I've published a few other things in the past while; other links to follow.
작성자: Finn Harvor 시간: 10:29 pm No comments:

The Sonje Art Center has a very good collection of Korean comics from the mid-20th century. The exhibit last till April, and is a must-see for those interested in Korean pop/graphic culture.
작성자: Finn Harvor 시간: 6:04 pm No comments: 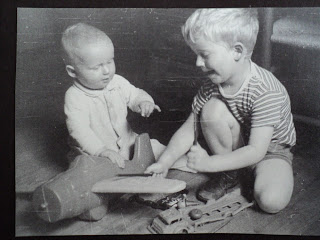 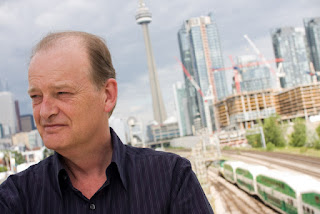 My interview with John Barber of the Globe and Mail is now up at my new site.
작성자: Finn Harvor 시간: 5:38 pm No comments:

Matt Kavanagh reviews John Lanchester's British social novel CAPITAL in the Globe. The genre of social novel is one I have a particular interest in, and it's one whose relative lack in Canadian letters I comment on in an article that recently appeared in Canadian Notes and Queries. Canada has not produced many social novels about contemporary life, and it has certainly not produced any that can compete directly with the best of what has been published in the US or UK (the example I cite is THE CORRECTIONS). The issue here is not that there are no social novels in Canada, but that they either are about other cultures altogether (think of Mistry's oeuvre) or are not as deliberately ambitious as that published elsewhere.

Why does Canada not produce more social novels? Well, the question can be answered more easily if it is framed differently: the country is producing the novels ... it is just not publishing them.

It's been a while since I've posted anything at this site. However, at the new version of my blog I have interviews with rob maclennan, Kevin Connolly,, Brian Fawcett, Vera Bouchard, Bernard Anton, Chad Pelley and Heather Birrell.

You can check them out here.
작성자: Finn Harvor 시간: 9:38 am No comments: