[Note: the following is an interview I did in December 2006 with Nash when he was still with Softskull. He subsequently left the press and is now launching a new venture, with releases scheduled for this spring. However, the following still makes for interesting reading.]
Richard Nash:

1. Ever since Sept. 11, there has been a decline in book sales, particularly sales of literary fiction. And since that time, it's been common in publishing circles to explain Sept. 11 as the main "cause" of this phenomenon. Do you agree? Or have other, equally important factors been driving the decline in sales?

1. I’m actually not aware there has been a decline in sales. I’ve certainly heard various bits of pontification here and there, but my sense is that it is soundbite stuff, and journalists trying to shoehorn trend pieces

2. The publishing industry has always been a marriage of art and commerce. But in recent years, the Cult of the Deal has become more influential, with agents demanding larger advances and marketing people paying especially close attention to sales figures. Is the "art" side of the business being pushed out?

The “art” side of the business has always been pretty marginal. Michael Korda, who ran Simon & Schuster in the 1980’s, has said that the publishing business’s relationship to supporting literature has never been all that significant, and that was a welcome bit of candor. That said, the business has become more hit-driven, hence the larger advances

3. Many major publishers now refuse to accept "unsolicited" work; that is, they will not even consider work unless it is agented. Is this a sound policy from point of view of finding the best new literary voices? Isn't there a chance good writing will be squeezed out?

They’re not trying to find the best literary voices, they’re trying to find hits. The agents are doing the same thing. The agents have more time to read than do editors so, as a division of labor, that seem “smart.” Sure, sometimes those qualities may overlap, and sure editors would like them to overlap, but ultimately it is only slightly more than coincidental. Which is something that has been true lo these many centuries. It is of course true that I am not going to publish something that I know is crap, but will sell, and that’ll be true for some of my indie publisher peers, but it is just as true that I will not publish something just cause it is good. The best literary voices will be found over a long period of time, true cultural processes, of criticism, word-of-mouth, the entire cultural apparatus. Publishing is simply a significant component of the economic component of the culture-making process...

4. Alternatively, for small presses that do accept unsolicited work, is the problem that the majors are squeezing the small houses at the distribution/retail marketing end? In other words, even when good writers get published by small houses, do they have a fair chance of winning an audience? Or are the major houses introducing an overly corporate, overly aggressive mentality to the book trade?

Retailers are the issue here, not the publishers. The biggest publisher in the US has maybe 5% market share...the biggest four retailers have over half the market. (in Canada, one has 70%...) Retailers mostly want velocity. Books selling fast in the first few weeks there are there, and wanting co-op/payola. Also, many independents don’t read unsolicited work any more—there’s simply not enough time. I’ve 400 MSS going back to Summer 2004...

5. Returning to the question of agents -- are they too powerful? If so, in what ways? Or are they a largely beneficial and necessary element of contemporary publishing?

5. There are a great many different kinds of agents. Some might have too much pricing power vis-à-vis publishers, but they don’t affect me at all. For the most part, agents are part of the filtering process, just like creative writing programs, freelance editors, professors, reviewers, critics etc etc. However yes, if there are a couple thousand editors in the business, and several hundred thousand manuscripts, then yes, obviously agents will be a crucial component...

7. Does America have too many publishers? Or too few?

8. In your opinion, how will new technologies such as the e-book or audio books affect the "form" of the book?

Way way way too soon to tell, as Mao’s premier Chou Enlai famously said about the French revolution when talking to Kissinger in the 1970’s. There will be massive changes.

9. Putting aside the hype, does the Internet provide a real opportunity to publishers? If so, how?

Developments in technology, many of which don’t have that much to do with the internet (the PDF, Quark & Adobe, higher quality printing) have an ongoing year-in, year-out significant incremental improvement to all publishers, though it slightly favors smaller ones, as the benefits of those technologies are only loosely related to scale. The internet constitutes an improvement in communications technology, improving the word-of-mouth process by which most books are sold, allowing retailers like Amazon to carry a broader array of inventory (though it is as much improvements in distribution and warehouse technology that enable Amazon as it is the internet...)

10. And what role can traditional, venerable institutions such as libraries and English Departments play in reversing the decline in sales of literary fiction?

Libraries none, since certainly there the sales of books have declined. English depts...well...it really depends on what you mean...the proliferation of creative writing programs have helped the sales of literary fiction, but the graduates are mostly too broke to buy books, and mostly focus on trying to get publishers to publish book. So there’s a small net positive effect. But English depts certainly don’t create lifelong readers.


About Softskull:
[by Ginny Weihart]
Soft Skull Press, an independent press based in Brooklyn, NY, was founded in 1993. Soft Skull Press publishes approximately forty titles per year, one-fourth to one-third of which are fiction. The average print run for a fiction title is 4,000.
작성자: Finn Harvor 시간: 9:00 am 5 comments:

From "The Business Army" 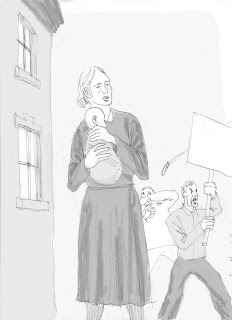 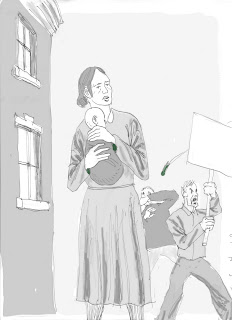 Again, I'm experimenting with Gimp. I'm getting better at using the paintbrush and eraser tools (I hope), though I'm still not where I'd like to be in terms of grey-scale effects.
작성자: Finn Harvor 시간: 8:13 pm No comments: