From "The Business Army"

Here are some images from THE BUSINESS ARMY that I've been "greyizing" with Gimp. Not all the images were changed at the same time -- in fact, there was a lag of close to a year between some of them. In that interim, I've become more comfortable with (and, I hope, more competent at) using Gimp. I've also gotten in the habit of saving files as I add each layer of grey-scale. This allows me to experiment with the image I want to use, since sometimes the most detailed and fussed-over one is not the one worth choosing. 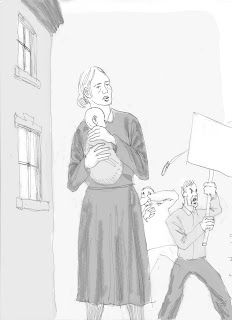 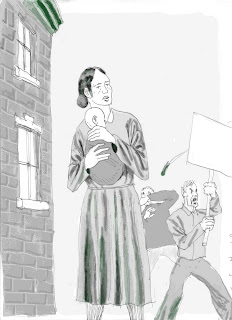 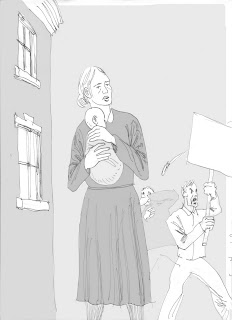 Kate Beaton's Hark! A Vagrant! on the relationship between Benito Juarez and Maximilian of Habsburg.

Melanie Chartoff and Larry David  on Alexander Haig, post the assassination attempt on Ronald Reagan, taking control -- albeit, in this case at least, very momentarily [via Long Sunday] 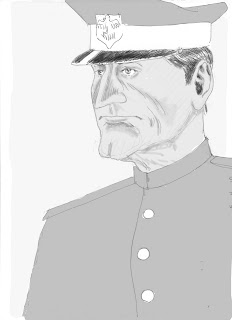 Levi Asher's recent post on Paul Ryan -- the Republican who wants to cut spending by drastically reducing social programs -- can arguably also be seen as a continuation of his  series on posts on egoism. For instance, central to this post is the effect that the egoism-embracing thought structures of Ayn Rand has had on a certain brand of neo-conservative theorizing (Ryan is a fan of Rand).

Ryan's brand of fiscal responsibility -- the phrase has become such a cliche that scare quotes are not necessary -- is one that voters in industrialized nations have become well-acquainted with: social programs are too expensive, government is inefficient at performing civic or national tasks like garbage collection or teaching or health care and private enterprise would deliver these services to clients better. In most countries, such Canada and South Korea, this results in fiscal conservatism that pares back the social programs that exist and does not initiate new ones. In a superpower such as the United States, the dynamic is similar at first glance, but quite different precisely because of its superpower-enabling institutions.

The historian Andrew Smith recently wrote a must-read post on the effect the post-World War Two military-industrial complex has had on the American economy. Smith's argument is that the great European powers of the 18th and 19th Centuries sowed the seeds of their own economic decline by overspending on empires, and, by necessity, their military establishments. The United States, on the other hand, a nation that was by the late 19th Century already awesomely powerful economically, did not overspend on its military. That changed with World War Two, when arms spending shot up stratospherically -- and also kick-started the U.S.economy. But the end of the Second World War did not bring a proportionate return to pre-war arms expenditures; the Cold War kept arms spending at an elevated level that represented a higher percentage of GNP than that which had existed previously. The result, Smith argues, is a nation in which social spending is less and rates of infant mortality or life-span are affected in a deleterious manner.

The connection between this argument and Asher's comments on Paul Ryan is, I think, this: military spending is rarely mentioned by the Republican party as a prime target for fiscal cutbacks. It is almost as if Republicans, as a political entity, have some kind of pathological blind-spot; a logically inexplicable (and therefore hysterical) inability to see the obvious. Even for supporters of the invasion of Iraq, it must be painful to read news reports such as this which alleges "loss" [read: corruption] of over six billion dollars in U.S. funds. Yet an outcry against the war does not exist among Republicans who otherwise are passionate about balanced budgets.

Even if one were to agree with the fiscal responsibility argument in its generalities, why the general American right-wing refusal to apply it in a genuinely even-handed fashion? Part of the answer, I think, lies in egoism: empire has become addiction; the psychic sense of power latent in the phrase "superpower" feeds an egoistic brand of ultra-nationalism.
작성자: Finn Harvor 시간: 8:38 pm No comments: 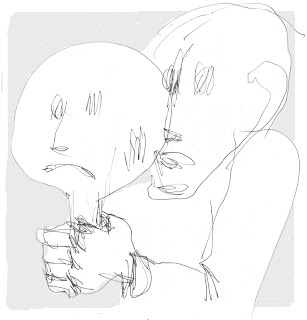 Finn Harvor
In recent months, Levi Asher of LitKicks has been writing a series of interrelated posts which might be characterized as being about the importance of human beings working together. As part of this, he's written a book entitled Why Ayn Rand is Wrong (And Why it Matters). And he's also written in a more general manner on his ideas about collective – as opposed to individual and self-interested – activity.
One post in this series appeared on April 8th, 2011. It is interesting on several levels. Asher states his main idea immediately: he is unconvinced that egoism is an elementary characteristic of humankind. Instead, he challenges the contemporary pop-psychological (or perhaps, evolutionary psychological) presumption about egoism:
Egoism, the belief that people can or should only act on their own individual self-interest, is the great unchallenged premise of our age.
It’s hard to imagine that many people fully subscribe to this idea, and yet there is no well-known critique of egoism. Various religions or social/political activist movements point away from egoism, but religious or political writers rarely confront the egoist premise directly. Many people object instinctively to the egoist idea, but there is no popular common understanding of why the egoist premise is a weak and unconvincing one.
Asher acknowledges that the idea egoism exists naturally and should be accepted as a fact of life is widespread: “A person might claim in an argument or chat about politics that "everybody's going to do what's best for their own selves", and who will argue that this isn’t true?” He also realizes that egoism has a political ideology.
Something about this dichotomy recalls the political dichotomy between conservativism and progressivism. In political or economic debates. the separatist or individualist position (lower taxes, suspicion of outsiders) is often seen as representing the base or core position, while the group-conscious or collectivist position is seen as a questionable artifice, a dubious advancement from the basic core. In this sense, it’s easy to mistake the egoist doctrine for good, simple common sense, and to dismiss any alternative doctrines as foolish, ideological fantasies.
But as Asher notes, “Non-egoists who allow egoists to take it for granted that we live only for ourselves give up too much ground.” Further: “The doctrine that all people care only for their private well-being is not a self-evident truth.”
At the core of Asher's critique, then, is an attempt to show that egoism is not 'elementary' – is not the default setting of humans, and is not the initial building block upon which further characteristics or behaviors – whether individual or social – rest. Asher does this through a couple of thought experiments. The first is his reference to simulation games that model successful human behavior.

For example, imagine a simulation of a town with 1000 simulated citizens. A hypothetical conflict emerges: the mayor of the town proposes to build a new road near a public park. Some of the citizens in the town form a pro-business party that supports the building of the road. Other citizens form a nature preservation party that protests the impact on the parklands. Still other citizens form a anti-expenditure party that objects to the spending of taxpayer money on the project.
This is nicely conceived description of how a real-world political struggle might begin at the local level. The policy of the mayor – to build a road – has its supporters and its detractors. But not all the detractors have the same motivation. And not all the people in any of the groups have the same personalities. Asher: “The game carries the argument to its conclusion -- but it cannot do this very well if it only assigns attributes to individuals.”
What is needed, rather, is, so to speak, a group personality: “From a software designer's point of view, the conclusion seems clear: for the model to work, attributes and aspirations exist at the group level as well as at the individual level.” The drives of the individual ego must sublimate themselves into the workings of each group; individual action alone cannot bring about any workable political solution – whatever the solution in this particular SimCity happens to be. Instead, given that some group will achieve some goal (for example, building the road or stopping its construction), the achievement of that goal will rest upon the “winning” group operating as an entity which is sur-egoistic.
The conservative-ideologic argument that egoism is primary to humans is not the case in a simulation game of this sort, and, given that the simulation game is a workable model of the real world of local politics, the question arises: what is primary here? From Asher's point of view, it is something larger than the individual. This explanation has serious ramifications because while it does not deny that egoism exists, it calls into question the idea that egoism is the root of human behavior.
[to be continued]
작성자: Finn Harvor 시간: 5:42 pm No comments:

Via Muhammad Iqbal, a teacher I met while at the CWC (Creative Writing Conference) held at the Politeknik Negeri in Jember, Indonesia, a link to the Dark Mountain Project.