From TRUTH MARATHON [Part One] 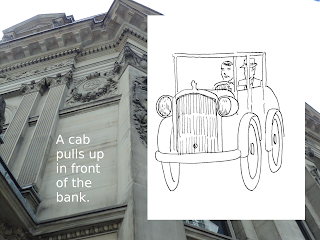 The street in front of the Japanese branch of the National City Bank of New York. The street is covered with a thin film of snow. Crowds move back and forth quickly: Japanese men, mostly, dressed in sober dark suits, but also the occasional vendor pulling a large wagon, or, with her head bowed, a woman.

The women are young and officious and also dressed in dark, business-like fashions. But sometimes they are wearing bright kimonos.

The overall visual effect is of a series of monochromes, from the black of window frames and wrought iron fences to the dark gray of stone walls to the steadily dirtying white of the snow -- but all this dotted by an infrequent bob of color.

A car pulls up in front of the Japanese branch of the National City Bank of New York. A WELL-DRESSED WESTERN MAN emerges. He enters the bank.


INT. THE BANK. A MOMENT LATER.

The WELL-DRESSED WESTERN MAN stands in line for a teller. After a moment, he reaches the front.

MALE JAPANESE TELLER: [with a strong Asian accent] Hello. May I helping you?

WELL-DRESSED WESTERN MAN: [speaking with a Northeastern, Ivy League accent] Konichiwa. Yes, I’d like to convert some yen to U. S. dollars.

MALE JAPANESE TELLER: How much?

WELL-DRESSED WESTERN MAN: [reaching into his jacket and pulling out a big envelope] Well, it’s rather a large amount….

JUMP-CUT.
INT. THE BANK. JUST BEHIND THE WELL-DRESSED WESTERN MAN.

ANOTHER WESTERN MAN, also well dressed, taps the first on the shoulder.

OTHER WESTERN MAN: [with a Latin accent] Mr. Bishop.

DR. SCHRIEBER: [somewhat anxiously] I’m sorry. May I have a word with you?

DR. SCHRIEBER: No. A private word.

BISHOP: [friendly] Sure. Just a moment.

SCHREIBER: [whispering] What I have to say is of paramount importance.

BISHOP: Oh. All right, then.

The two walk to an alcove.