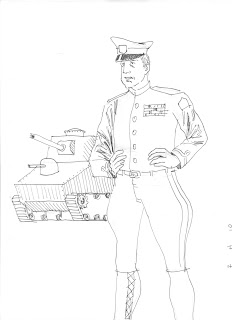 An excerpt from my novel about the Great Depression and an attempted fascist coup in the United States:

"The hell we'll take orders from the likes of you! You're just a pawn! Don't you feel any shame? There are veterans here who can barely feed their families! Why don't you think of justice first before you start lecturing others on their duty?"
But the troops are unmoved. And as they continue their advance, the demonstrators are forced to choose between retreat and the feeble defiance of the un-armed which, soon enough, turns to defeat.
A different officer blows a whistle sharply, and second, more aggressive battalion of cavalry move forward. Some of the soldiers, upon reaching the crowd, reverse their rifles and use their butts like truncheons.
Behind the foot soldier, also advancing, is a column of tanks. In the midst of them is the figure of George S. Patton. He surveys the crowd for a few moments. Then he says to his crews, "Charge!"
The tanks trundle-squeak forward; the infantry stomp in rhythm, the cavalry whinny and attack. The demonstrators are now divided into a series of broken up groups. Some turn to run. Others scream, push and shove. But from several yards away, it seems almost as if the demonstrators might have a chance: the troops and the horses and the tanks do not seem to be achieving a clear victory. Then a shot rings out, followed by another. A woman's voice can be heard screaming hysterically, "Jesus! Lord Jesus!"
This only seems to stiffen some of the demonstrators' resistance, even as someone else, his voice also hysterical, calls out, "Doctor!" and the melée reaches its crescendo.