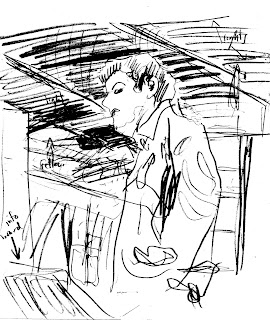 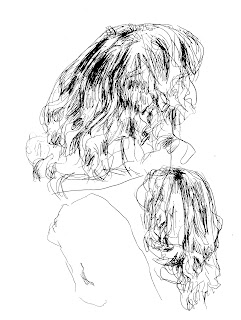 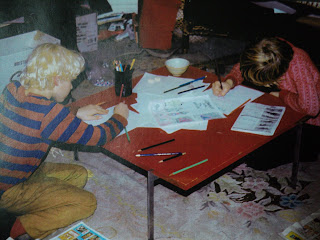 The two uppermost were sketches done when I was still an undergrad. I originally did a BA at Trent, but then came to York for its fine arts program. But I was a downtown guy, so I spent a lot of time hanging around Robart's Library at U of T. The top drawing is from there. The middle drawing was drawn on the back of a syllabus handout for an art history class I took at York (to give you an idea of when it was circa, it was printed in blue mimeograph ink).

I liked sketching and did it almost compulsively (I drew the middle sketch when I should have been taking notes). And, of course, since I had artistic ambitions, I was interested in honing my skill. "Craft" was a word that came up sometimes from my teachers, I think. "Process" was a very trendy word at that time. But I didn't like terms like that and was simply interested in drawing better. I was probably dissatisfied with the top drawing; I tended to think outright sketching was too messy. I like the drawing now. One instructor I had -- a really great guy named Eric Loder -- said "never throw out a drawing. You never know how you'll feel about it later." It's a hard rule to follow; Suki chastises me for all the paper I have. But it's a good principle to adhere to as much as possible.

And then, at the bottom, the table where it all started. The Danish coffee table where Richard and I did all our early drawings and comics.
작성자: Finn Harvor 시간: 5:49 pm