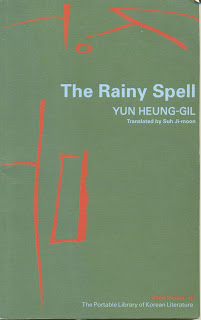 I'm currently working on a couple of papers on Korean writers. For source material, I rely heavily on English translations of their work -- in particular, an excellent series called the Portable Library of Korean Literature published by Jimoondang Publishing. This is a very affordable series: most of the title are still 5,000 won (around $5) ... this is much cheaper than titles in North America, and one aspect I like about this is I don't dawdle and hesitate the way I usually do before I buy a more expensive book -- I can afford to take a chance or two.

The volumes are very slim. Most of them are two or three short stories or a novella. Again, this is an aspect of Korean writing that I like: short fiction was promoted partly because it was the form that was being popularized in the mid-twentieth century by newspapers. It was also relatively easy to publish at an affordable price. And the stories were often taught as part of high school curricula -- Sonakki (소나기) being one of the paramount examples of this, but as I understand it titles like Yoon Heung-gil's The Rainy Spell (장마) and titles by Kim Yu-jeong, Pak Won-seo and Oh Jung-hee also being taught as a part of a program to promote a national literature. (Jimoondang publishers quite a few authors besides these, including Yi Mun-yol, who teaches at the university where I work.) Coming from Canada where there is a still a struggle to get substantial numbers of Canadian books on reading lists, this impresses me.

What is happening now, however, is, as with publishers around the world, traditional print publishing is under siege; tech change -- partly in the form of the contemporary "smart phone habit", and also longer term change such as the ascendancy of TV as a dramatic narrative medium -- has had a great impact on publishers here.