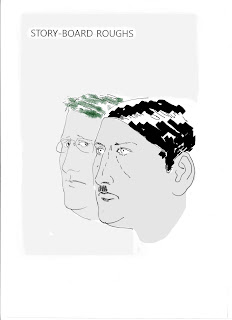 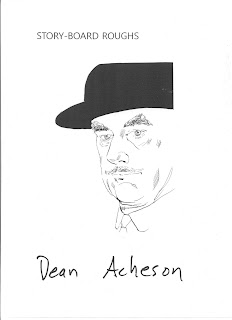 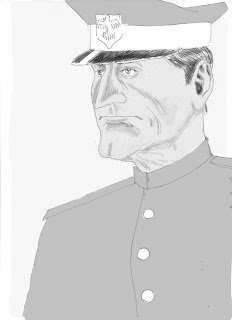 Above are drawings from upcoming excerpts from TRUTH MARATHON. They show, in order, Roosevelt haunted by the political and military power of Hitler, Dean Acheson, the son of a Canadian bishop whose family emigrated to the United States where he was born and who was a  powerful member of Roosevelt's cabinet (where he accelerated Roosevelt's boycott policy against imperial Japan, thus increasing the likelihood of conflict between the US and Japan in 1941), and Douglas MacArthur, who was a central character in the Bonus March, the defense of the Philippines (including the fiasco at Clark Airfield), and the victor of the Pacific War as well as the supreme military leader of UN forces during the early stages of the Korean War.

TRUTH MARATHON is partly about the shadow cast by actions taken by all these historical characters. In the case of Roosevelt, the decision to enter World War Two was already taken: the United States was fighting a naval war in the Atlantic. It was supplying materiel, food and money to the British. But unlike Canada, which had entered the war as a belligerent a week after Britain and France declared war on Germany in 1939, and which had played a key role in assisting Britain after the fall of France in spring 1940, the administration of Roosevelt did not have sufficient political support to enter the war. So it was entering by stages.