Last Question of the Evening - a story and authorial movie

Last Question of the Evening

An office comprised of cubicles, all of them lined in rows, as if the aisles of an airplane had been converted into office space. In each cubicle, a worker with a headset.

"They're all liars," a voice through one headset says.

The man conducting the interview, Anders, doesn't reply. He waits for the respondent to answer the question in the survey.

"Eh?" the respondent says, his voice charged with a coercive energy. "Whaddayou think?"

"A lot of people feel the same way you do, sir."

"That's right!" the man from rural Saskatchewan says. "They all go to Ottawa, they promise you the world, and then they do nothing."

"Sir, if you could please answer the questions as they're phrased, we'd get through this much faster."

Saying this is a mistake; not because the respondent is offended by Anders's chastisement, but because it suddenly makes him aware of how long he's been on the phone. "Good lord, mister! Lookit the time! We've been yammerin' for half an hour!"

"I can't be talkin' about all this sort of political nonsense for half an hour!" 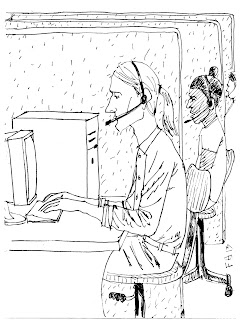 "Please, sir. Would you just bear with me for another ten minutes?"

"Ten minutes?! Listen, I don't have ten minutes. I think I told you enough."

"Is there some time I could call you back at?"

"I can't do that, sir." Now a note of pleading has entered Anders's voice. "I'll get through the rest of this really fast. If we don't finish it, then I'll have to throw the whole thing out."

"Are you sendin' me money? I give you a lot of my time, I expect something in return."

"Sorry, sir, the company I work for hardly pays me anything, I don't think they'd be generous enough to start mailing cheques to all the people we interview."

This attempt to establish a sense of camaraderie falls flat. "I'm serious, mister. I gotta go," the man says.

The line is cut.

Anders lets out a deep sigh and swivels around in his chair. He first looks at the supervisors' station, then the clock. It's twenty to ten. An incredible exhaustion, mitigated by the proximity of quitting time, washes through him. He rubs his eyes and stands up.

Laura, one of the supervisors, casts him a condemning glance. Feeling guilty, then, an instant later, feeling with defensive pride that he does his fair share of work and deserves the occasional break, he walks over to the station.

"Cheques in?" he says. The question is virtually rhetorical.

Laura looks at him with her glassy, neutral eyes. "No," she says.

"They were supposed to be here at five," Anders says.

"Don't blame me. There was some screw-up with the payroll system." 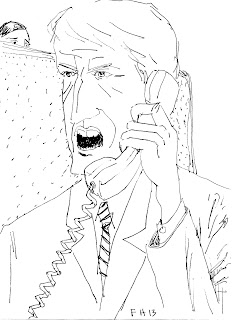 "You're not the only one." Laura smiles tightly. "They'll be in tomorrow."

Perhaps Laura feels a touch of compassion for him. She regards him with full attentiveness. But then she says, "You should plan ahead."

Anders gives her a what's-that-supposed-to-mean? look, then turns away to make a trip to the washroom.

On the way back, he notices one the senior analysts behind the glass wall that separates the executive offices from the hall that leads to the teleresearch room where the interviewers work. The analyst is a bulky guy who's shaved his head bald and clearly works out. He has the aggressively friendly, somewhat sinister manner of a doorman at a night club. In front of him is a woman in a power suit.

Anders only glimpses all this as he walks down the hall.